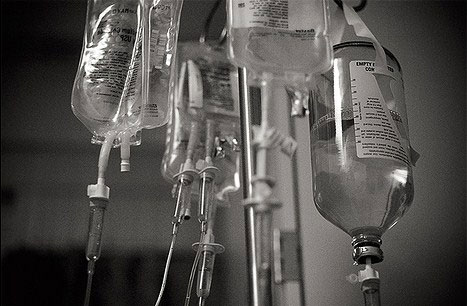 Chemotherapy is a method used for treating a variety of cancer types.  Systemic therapy, briefly called „chemotherapy” or simply „chemo”, is based on the use of pharmaceuticals whose role is either to destroy or prevent the growing of tumour cells. It affects the primary tumour, metastases, and the tumour cells circulating in blond and lymphatic system.

This method allows getting rid of tumour cells in almost all of human body. Depending on the type of cancer and the stage it is dicovered in chemotherapy may treat it totally, prevent or slow down its development and spreading (metastases). At times patient’s quality of life gets also improved and the symptoms are alleviated.

Pharmaceuticals used in systemic therapy include cytostatics, antibodies, inhibitors of enzymes, hormones, immunotherapy. These are typically prescribed in form of tablets, intramuscular and intravenous injections and drips.  Some of the medicine is given on daily or weekly basis, others are prescribed to be taken every couple of weeks. Best results are seen when chemotherapy is implemented jointly with radiotherapy and surgery (induction treatment, complimentary treatment, palliative and combination treatment: radiochemotherapy).

Systemic therapy is applied to many types of cancer, but not to all of them. The need for and the possibility of treatment depends amongst the others on the type of cancer, its subtype, and its phase. Patients’ general and their most important organs’ condition are also the deciding factor as the systemic therapy is hard and toxic. It may destroy also the cancer-free cells.

Side effects of oncological treatment.

Chemotherapy affects all of the human cells, cancer-free cells get damaged and their growth is prevented as well. This leads to numerous side effects. As the tolerance for pharmaceuticals varies a lot in patients, the intensity and the number of side effects is different case by case.  Many patients are pretty tolerant to chemotherapy and very rarely report any serious distress. There are, though, patients for whom such a distress is observed. Note that most of the undesired symptoms can be mitigated or totally eliminated by applying additional set of pharmaceuticals or appropriate actions.

Side effects are seen mainly in the fast growing cells, that is in: bone marrow, oral cavity’s and digestive tract’s mucosa, skin, and hair follicles. Some of the undesired results of treatment may occur straight after the medicine intake – in form of nausea, vomiting – others will be visible after a couple of weeks or months. Before the treatment begins, doctors discuss with their patients the possible side effects and complications connected with a particular therapy. Patients are given a set of advice on how to mitigate the side effects or to prevent them entirely

Many oncological patients are the elederly who become not only affected by the oncological treatment but also the illnesses they have been going through. Diabetics, hepatic diseases, celiac disease, malabsorption syndrome all require a special diet, irrespective of the oncological treatment. Before the chemiotherapy a very light breakfast can be served. During and a few days after the treatment it is advisable to introduce a diet composed of an easily digested dishes. The rule of “less and in smaller portions” should be followed along with the introduction of big amounts of liquids (up to 2 liters per day). If there are no counter-indications related to patients history of illnesses, there are no significant limitations except for the period mentioned above – in other words, a regular healthy diet should be applied.

Unfortunately there are many misconceptions spread around the oncological diet and the patients undergoing chemotherapy. Before such diet is applied, make sure to consult it with your doctor. Many of the diets are unfavorable to patients’ organisms and deprive them of the essential nutritional components. This results in a patient’s worse general condition and the weakening of their strength to fight the disease. A vegatable-rich diet, beetroot-based one especially, is not recommended to chemotherapy patients as it may worsen their general condition through the intensification of after-chemo diarrheas. Patients should not eat citrus fruit, especially grapefruits.

Lack of appetite, taste and smell disorders are quite common especially during the first days following the application of cytostatics (for instance, metallic taste of the served dishes). It is normally a temporary conditio and it wanes with time. If needed, your doctor may prescribe additional conditioners and/or medicine